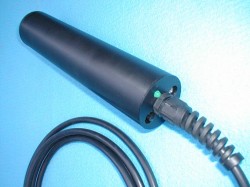 The LA 202 system provides detection of boiler tube leaks when they are not detectable by traditional methods. This allows management time to plan a repair strategy and schedule a controlled outage for tube repairs, at a time which is less expensive to the plant. Providing the scheduling flexibility needed for a controlled, organized shutdown. 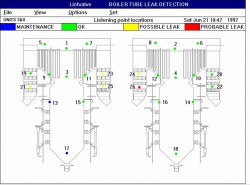 The LA series of leak detection sensors have the pedigree of 30 years of leak detection design and application experience. Originally developed in the 1970’s with the old UK CEGB. It was found that when simulating a steam leak at one side of a boiler, the most sensitive transducer for detecting the white noise given off was the airborne sensor developed by our design engineer of the LA series.

In a typical installation sensors are typically placed on both sides of a boiler in a box arrangement at a level in-between two rows of tube banks to allow comparison between absolute sound levels making the location of the leak relatively straight forward.The noise from a steam leak invariably increases with time, while sounds from fans, sprays and mainly soot-blowers vary as they are brought into and out of service. Detecting a leak is a simple matter of monitoring the sound level of each sensor (which has boiler noise filters applied) and trending the absolute sound level and observing the rate of change against time.

When a leak is discovered, the operator can schedule maintenance in a timely organized and efficient manner. 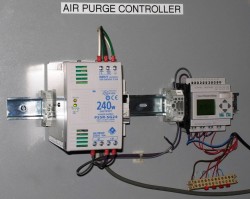 Modified probe with microphone mounted on the boiler wall.

A GESI Technician installing the LA 202.